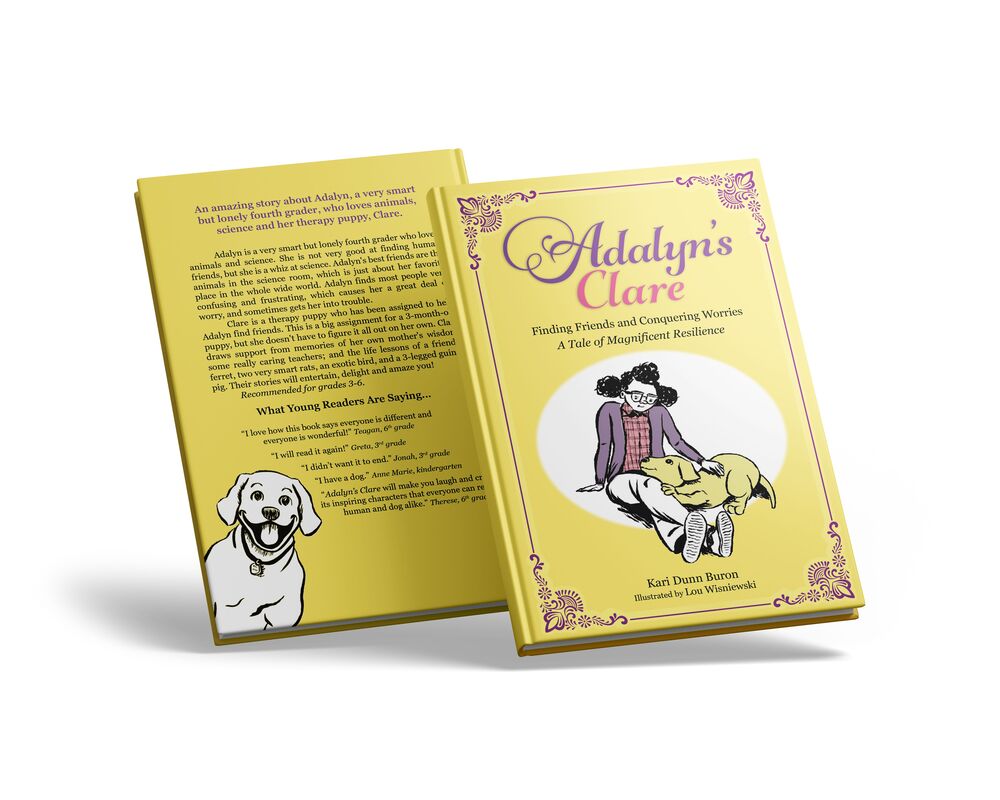 I thought I would share a review from our previous launch, written by Jennifer Twachtman-Bassett in the Autism Spectrum Quarterly!

In the “no man’s land” that is the tween and pre-tween years, it can be difficult to find appropriate children’s literature, in general, let alone a book that teaches tolerance, compassion, and kindness through a story that is appealing to that age group.  Adalyn’s Clare achieves this goal in a skillful and sensitive way.  It is a book that will not only appeal to children in its third-sixth grade target range, but also impart lifelong lessons along the way.

It is no wonder that this lovely story achieves its ambitious goal, for it is written by someone who understands the “territory” – that is children with differences, special interests, and anxieties.  Skilled teacher and award-winning author, Kari Dunn Buron, has created a “match made in heaven” with her lead characters – a very smart but highly anxious young girl and
her sweet-natured, wise-beyond-her-mere-three-months canine companion with a very special “friendship mission”.

Adalyn’s Clare is the story of a fourth grader named Adalyn who presents with many of the characteristics autism and other conditions associated with social anxiety, although no specific diagnosis is given.  Clare is Adalyn’s therapy dog, brought in to help her make friends with her peers.  The book alternates between the perspectives of Adalyn and Clare, and adeptly explains why each character thinks and behaves the way she does, as well as demonstrates why it is important to learn about and appreciate others’ perspectives.

Adalyn is presented in a straightforward and honest manner, as a girl who is trying to behave as expected while coping with her “worries”, but also as one who makes mistakes – sometimes big ones.  Clare is a puppy who is learning as well.  So, she seeks help from some endearing animals in the science room, who advise her to try to find Adalyn a “pack” of other kids like her that she can relate to.  Notably, finding a small group of peers that share interests similar to Adalyn’s is not all that difficult, demonstrating one of the author’s premises that Adalyn, while different from her peers, share more commonalities with them than differences.

In its short 114 pages, Adalyn’s Clare manages to address almost every common issue that challenges those on the autism spectrum (as well as many other children in general) – tolerating social and behavioral differences; bullying; maintaining self-control; the balance between independence and seeking help; and even how to handle verbal threats in the age of “zero tolerance”.  The book even reveals the contrast between insightful and insensitive teachers for the purpose of emphasizing the importance of sensitivity in both adults and students.  By so doing the author skillfully and nonjudgmentally underscores the importance of opening oneself up to new knowledge, becoming more compassionate, and admitting one’s mistakes.

With the tremendous emphasis on inclusion in recent years, the challenges that Adalyn faces are becoming more and more common in regular education classrooms today, creating a need for resources that can help to increase sensitivity to and understanding of children with differences.  Adalyn’s Clare is an ideal resource for this purpose.  Indeed, it would be an excellent read-aloud book in classrooms where teachers could guide the discussion of issues raised in the book while helping children to discover the book’s valuable lessons.  The absence of a diagnostic label for Adalyn adds to the widespread appeal of this book, as any child who is a little different from his or her peers will easily be able to relate to Adalyn.  I plan to make Adalyn’ Clare required reading for my third and fifth graders – and I would highly recommend it for yours!

An Interview with Kari Dunn Buron

Wendy French (5th grade Classroom Teacher):  Adalyn is a unique character and she’s easy to relate to.  How did you create her character?

Kari:  Adalyn is loosely based on four different girls I have worked with over the years at Camp Discovery, a camp sponsored by The Autism Society of Minnesota and designed for youth with Asperger Syndrome.  All four girls had great difficulty finding friends in school; were exceptionally bright academically; and all had problems in school due to social anxiety and emotional regulation.  I feel strongly that children with anxiety issues can benefit from relaxation skills, and so I made that the foundation of Adalyn’s special support program.  I also felt that the girls would benefit from opportunities to have mutually valuing experiences with their peers, and so I created the science club for Adalyn.  The science club was by nature a social event, but one that allowed Adalyn to shine in her peers’ eyes.

Wendy:  What is your favorite excerpt from the book?

Kari:  I love the exchange between Adalyn and Henry when they first meet in the science room:

Suddenly, Adalyn turned and looked at Clare and Henry.

“Do you know Clare?” she asked Henry.

“Do you know which is the highest fresh water lake in the world?” Henry replied, immediately realizing it was the lamest thing he had ever said in his whole entire life.

But Adalyn didn’t seem to mind, and went straight on to say, “That would be Lake Titicaca, located in South America, on the border between Bolivia and Peru.”

There was a brief moment of silence as Henry and Adalyn both realized they had almost had a conversation.  Then there was another moment, when they both realized that Adalyn had just said the word “Titicaca” out loud.

Wendy:  What is it you like about that excerpt?

Kari: I think that exchange between the Adalyn and Henry not only highlights Adalyn’s social awkwardness, but also highlights her strength in science and her appealing ability to find silliness in herself.  Children who do not experience social anxiety will hopefully feel empathy for Adalyn and truly like her based on these three characteristics.

Wendy:  What lessons can children learn from the book?

Kari:  Explosive behavior is scary for everyone, but particularly for an elementary aged student who might observe another student losing control but not understand why anyone would act in such a way.   I am hopeful that this story can, in a playful way, help to explain social anxiety as well as explosive or difficult behavior.  Adalyn’s problems are not just “bad behavior”, and I hope the story illustrates that in a way that children can appreciate.  Adalyn also has a program that might not be obvious to everyone else in the school. Mrs. Kelly is working as hard on teaching her relaxation as Mrs. Thomas is to teach her reading or math.  Relaxation is a very important part of Adalyn’s school plan.

I also hope that children can appreciate and respect Adalyn’s difference.  I hope this story can be used as a part of an anti-bullying campaign to jump-start a discussion about the painful side effects of bullying. The story could also prompt discussion about Adalyn’s unique nature, and how fun it would be to have someone like her as a friend.

Wendy:  Can you tell us about the real Clare?

Kari:  I had been exploring the idea of canine therapy for a year before my husband gave me a little yellow Labrador puppy for my birthday.  I worked with my school administration at the time and arranged to bring Clare into school from the time she was 3 months old.  She had an impact immediately.  Very socially aloof students began to flock around me to investigate the new puppy.  Highly volatile students appeared more relaxed, and un-motivated students seemed to be motivated by the opportunity to be with Clare.
At this same time, an organization called Can-do-Canines (formerly known as Hearing and Service Dogs of Minnesota) requested training in autism.  As an Autism Education Specialist, I was able to offer them training and in return they officially trained Clare and me as a “Facility-specific Service Dog Team”. For two years we spent an average of 6 hours a week working with the students in school, and for 5 years she worked with me at Camp Discovery/Courage North. I wrote an article about this experience for the Autism Asperger Digest that can be found on my website ( HYPERLINK "http://www.5pointscale.com" www.5pointscale.com).

Clare had amazing insight and gentleness. She seemed to know when someone was having a bad day, and she gave that person her attention.  One game she learned at camp was a “sharing game”.  Two campers would be throwing the tennis ball for her to retrieve, and she would bring the ball back to first one kid and then the other.  She seemed to instinctively know how to share!  Other than basic obedience, most of Clare’s skills were those she just came by naturally.  I found a poem online titled “If a Dog Were Your Teacher” about the stuff you would learn if a dog was your teacher (author was unknown) and one line was:  “When someone is having a bad day, be silent, sit close by and nuzzle them gently."  This was always Clare’s mantra, and a skill I gave her fictional character as well.

Wendy:  She certainly was an amazing animal.  I was so sorry to learn that Clare passed away.

Kari: Thank you.  Clare lived a good long life, and she died at our Nova Scotia home in 2018.  She is buried there near the Bear River with a garden of lavender covering her grave.  I think of her every day.

Wendy: She was very special. Overall, how do service animals help children with special needs?

Kari:  Both service dogs and therapy dogs have been used to support children with special needs.  A properly trained dog can discourage kids from running when frightened.  Dogs provide companionship and encourage children to be more independent and social.  Dogs also increase social acknowledgment by other children. Changes in the mood and behaviors of children who have service dogs have been reported.  These changes include such things as decreased social anxiety, increased calmness, a reduction in the number of “meltdowns”, and defused anger. The presence of a service dog signals to the public that the child has some validated challenges and is not just misbehaving.

I would stress to everyone that making a decision to use a service or therapy dog is very serious.  This is not an intervention that can go unmonitored or that can be dismissed if everyone involved does not see the benefits expected.  This is a commitment to the service dog industry and to the dog herself.  Even highly trained service dogs require ongoing practice and sometimes re-training.

Wendy:  Are you working on any new projects?

Kari:  I have recently regained control of my academic books that are now in need of updating, so that project will take up much of my time in the immediate future.

I am re-writing Adalyn’s Clare as a screenplay.  During the pandemic I took an online screenwriting tutorial and the script is now in its’ 3rd draft.